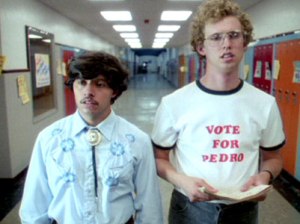 One of the more important things I took away from last semester (in which I studied personality theory, positive psychology, and public speaking) is that cognitive behavior work should undo defense mechanisms rather than create them.

This actually came to me as I revised a speech I prepared, The Psychology of Weight Maintenance, which relied heavily on Judith Beck’s work.  She talks about 7 questions, which I called self-interview, because I didn’t have time to list the 7 questions.  The purpose of self-interview is to cut through lies we may be telling ourselves, and it occurred to me that we lie to ourselves for the same reasons we might be tempted to lie to others:  to spare feelings, to avoid conflict, or because we think there will be a better time to deal with an issue.

Well, it was partly Judith Beck, and partly my husband watching a show called Life Unexpected where getting caught in a lie is the main plot device.  Some people also embroider or lose track of what is a lie and what isn’t, which can certainly happen if you swim in them regularly.

I had a disagreement with my personality professor early on in the term because he asserted that no defense mechanism is healthy because they distort reality.  The thing is, so much of culture and language is a kind of defense mechanism.  We wear clothes to distort how we look.  They can modify the harsh reality of being outside.  We filter what we say and to whom, and I think this is important.

It may seem like personal constructs (which I consider the aim of cognitive behavioral work) are defense mechanisms.  It can depend on whether a construct moves us toward greater utility or not, which is an old question.  Kelly said the choice correllary is that we will select constructs that allow more freedom.

In positive psychology we learned that freedom is not always happiness.  Certainly the example of Malcolm Reynolds illustrates this, to my mind.  But I think they were complaining about the more superficial choices we are offered as consumers.  Do we choose Coke or Pepsi?  Advil or Tylenol?  Macdonald’s or Burger King?  When any of these is actually a choice that limits your eventual use of your pancreas, your liver, or your arteries.  Construct theory relies on the idea that we actually can tell between a superficial choice and an authentic choice.  I don’t know if this is always true.  Unfortunately, our information marketplace is driven by attention, not truth, and so many of us lack the knowledge that would be involved in discerning what will bring utility; what choices are authentic.

Where defense mechanisms are particularly insidious is when we hide our true motivations from ourselves. (As Quentin Cook explained in his October 2014 General Conference Address.)  Is it any wonder we cannot find motivation when we work so hard to hide it?  Defense mechanisms are problems when they set up particularities about our behavior that are different from what we believe is true of other people in our situation.  We are in violation of the Golden Rule.  Often this happens by comparing our own best behavior to the worst behavior of another person.  We then build our defense mechanisms upon anothers.

Idealized self is another problem, the one people are more concerned that cognitive behavior work will result in.  This is when we set up an idea of what we want to be, and because it is ideal, we excuse ourselves from actually fulfilling it, or we sabotage our efforts in order to avoid anxiety (what I think of as the Pedro effect, from the fellow who shaved his head shortly before the school election.)