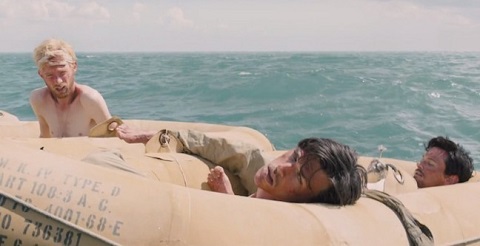 We saw Unbroken last night and as I was waking up this morning, I was thinking about how your mitochondria make H2O, and how this might have explained Zamperini’s survival in the lifeboat.  Though it doesn’t explain Phil suriviving poor Mac.  So maybe it was their psychological fortitude.

Zamperini, from a more equatorial cline, would probably have less mitochondrial uncouplers, meaning his mitochondria are set up to make water instead of heat.  This got me thinking about differential responses to medicine, and aspirin’s role as a mitochondrial uncoupler.  That is, it transports protons in the mitochondria and reduces the formation of superoxide (which is alternative to H2O production and also competes with the nitric oxide process).

Superoxide is an agent of inflammation and platelet activation, which are good to have when they are needed, but kind of a pain the rest of the time.  I had learned in physiology that NSAIDs like aspirin block COX, an enzyme needed for thromboxane processing, but superoxide reduction would constitute a second avenue of clot reduction.

I guess I started out thinking that straightforward mitochondrial function, just by producing water, is going to thin the blood somewhat.  I got up and started reading about it, and it turns out some folks are recommending low dose aspirin for prevention of colorectal cancer.  This is interesting because the black population is far more affected by colorectal cancers.  Which is consistent with my theory of clinal mitochondrial uncoupler distribution.