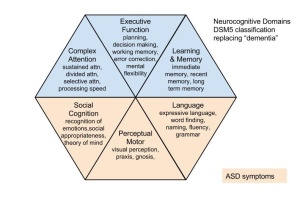 When you think of Autism and the DSM5, you probably think of how they took away Asperger’s Syndrome, PDD-NOS, and the usage of “High Functioning Autism”.  And they added a Social Communication Disorder that some people who used to be designated as Aspergers now fell into, and some have lost services as a result because resources and advocacy have not been developed for SCD.  Some are upset to be relabelled with ASD.  No one likes change, but it seemed ironically cruel to start the dimensional diagnosis revolution with people on the spectrum.

This was not the only change to the DSM.  What normal people would call addictions were overhauled with a dizzying dimensional system, a similar overhaul of personality disorders was prepared but being too radical, it was relegated to the “For further study” section.  And dementia was replaced with what I have pictured above:  a mind made up of attention, executive function, and memory, and then 3 other central nervous system domains of sensory, socioemotional, and language (interestingly, the triad of autism symptoms).

I’ll grant that this system was meant to open cans and I’m trying to hang pictures with it.  For a long time I couldn’t figure out what the 3 (blue) segments of mind meant.  My kid who used to have PDD also has ADHD, so I kind of know what an attention dysfunction looks like.  I had heard of executive function before, as a property of the frontal lobe that fully develops in the mid 20’s, and which is diminished by intoxication.  And memory, heck, even computers have storage.

But then I was reading a paper on multitasking* that introduced me to a cognitive model called ACT-R, which reminded me of these neurocognitive domains.  ACT-R seems to me to be Attention and its transactions with the mental (blue) domains as well as language (problem representation).  And finally understanding how the blue areas work together, I realized what people with ASD still have going for them, even as they struggle with language, socialness, and stereotypy (perceptual motor). 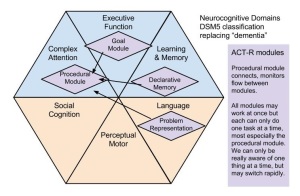 As a linguist, it’s a little difficult for me to understand what language means to most people.  I guess it’s not uncommon for people to consider language as the mind itself, as the medium of thought, and how the contents of our minds can be made known to others.  I still basically agree with the idea that natural language is a distinctly human capacity.**

But I’m persuaded language is not the mind itself, attention comes closest.  Attention is our awareness, and while we seem to think by talking to ourselves, there is much more going on than that.  ACT-R stands for Adaptive Control of Thought-Rational, and so isn’t very concerned with feelings or meatspace.  It is a model of minimal functionality, applied to AI.  But awareness can transact with all the domains, or just be itself.

This model doesn’t cover close to everything, like where does music go?  I suspect it’s a transaction between language (symbol/sign manipulation), social cognition, executive function… heck, it has everything, especially when you make music.  That may be why music does such wonderful things for the brain.

Still, it would be nice if my kid would speak.  I was reviewing some videos of my preschooler’s ABA sessions.  And I wonder whether for him, language might be like housework for me, a blend of boring and overwhelming that winds up in anxiety.  He communicates non-verbally and has a few words (less than five if you consider that counting to 10 or knowing colors are discrete lexical entities).

** I’d argue the ASL of apes is very limited, and does not display the things that make ASL a natural language such as recursion, complex syntax and morphologic inflection.  Apes can “speak” in the same sense that I knew Russian after a single semester of study.  I knew how to sound out the alphabet and had a small vocabulary, but it was more of a memory task than real language.